Around the House: Flooring Fix

By Dawn Sailors In Living Room

There is a lingering half-finished project that has been embarrassing the heck out of me for a year. You know the kind I mean? The one that you KNOW looks TERRIBLE. The one that’s right out in the open so there’s no way anyone who visits could possibly overlook it. The one that you just keep putting off for whatever reason and have trained your brain to pretend like it doesn’t exist. Yeah, that one.

In my house, the project was the half-removed railing in my living room. Behold:

Backstory: There used to be a giant 70s style railing here separating the living room from the kitchen area. I hated it with a passion and wanted to tear it out from the moment we moved in.

I originally convinced myself that I could live with it, and painted the whole thing white, thinking that would help me accept it. It did not. (A few old photos here of how the space was looking pre railing removal.)

I couldn’t get past how it made the living room feel caged in. We have a sunken living room, with a step down from the kitchen, which is why the railing was there I suppose. But the combination of the two was reminiscent of a zoo. I decided it had to go.

Early in my pregnancy with June, when I was past the morning sickness, but not quite to the extreme exhaustion phase (isn’t pregnancy beautiful?) I got a sudden nesting urge to demolish the railing. So with the hub telling me I was insane, I tore the whole thing out. Or almost the whole thing.

The railing was a BEAST to remove. It was so well constructed that I actually injured my wrist trying to pry it loose. So by the time I got the majority of it out I was dead tired and the bottom piece, aka the most stubborn, heavy, and difficult piece, was still there.

But I was really happy, because there was no more cage, and I could envision how it would all look when we removed the rest and fixed the floor and it was progress!

And that was 18 months ago, according to this photo on my instagram feed.

Yeah. I know. I’m embarrassed by my own lack of follow through. But I’m happy to finally report that we have flooring!

That’s right. just over a month ago, I decided I’d had enough and got out my crowbar and hammer. I wrestled with that darn thing and enlisted the hub to provide a little extra muscle too, and we finally won the battle. The element of this project that had been causing my hesitation was literally removed in 15 min. I really don’t know why I put it off for so long.

Once it was out, the process was super simple. We had some extra floor boards (they’re laminate) in the basement that the previous owners very kindly saved for us, so I just cut them down to size and glued them down with quickset. It took a little work to get them level, because the railing was set lower than the rest of the floor, but once I had it worked out with some scrap wood underneath, it was nearly seamless.

The last step was installing the stair nose. Apparently, as I found out from first hand experience, you can’t just go to Lowes and buy a stair nose. You have to order them and it takes a couple of weeks to get them. So I had to live with the unfinished look a bit longer. I took a photo of the profile, and a scrap of our flooring in to the store to make sure the color would match, and I had to order two lengths, since they come in 78″ sections and we needed 154″ total.

It was a little frustrating to finally have the floor fixed and then have to wait two weeks for it to really look nice, but the final result is so worth the wait. Here it is with the stair nose finally all installed!

I have some plans for this area eventually. (I feel like I say that about everything in this house.) For starters, we will remove the sliding glass doors at some point and replace them with French doors. Brett isn’t keen on that idea for some weird reason, but I can’t get over the dream of French doors and my hatred for apartment style sliders. It will happen. Another change I’m contemplating is extending the kitchen area over by adding permanent base cabinets on this side. I’ve been told that sounds strange, but I have a vision. That one is still up in the air, so for now, I’ll be content with this little red vintage hutch/table I picked up at Junkstock a couple years ago. I do love the pop of color it adds to the space.

I also patched and painted the hole in the back wall where the railing had been (again, why did this take me so long??) and the overall space just feels so much cleaner and brighter. I really love it! I’ll leave you with before/after photos looking in from the kitchen, so you can really tell just how huge a difference this made in providing an open-concept feeling to our kitchen/living room area.

What do you think?? It makes such a world of difference in person. I even had one outspoken family member (it was Dania) tell me that this is the best and most overdue update we’ve made to the house so far. So I guess you could say it has been met with wide approval. 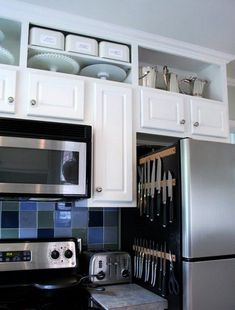